Linda Barutha drives organic traffic on steroids with Pinterest clicks and pins. It’s the untapped SEO equivalent of gold for online businesses of all sorts.

Want to avoid all the drama and bad grammar on Facebook?

(I got that from a meme on Pinterest, in case you are wondering)

Which, if you ask Linda Barutha is completely correct… but also totally wrong.

Actually, her official title is Organic Lead Generation Strategist and business-owner-slash-CEO. She makes her moola with her Pin2Win concierge service. So indeed… Pinterest is her arena.

If you’re a creative, you’ll be going yes-yes-yes by now. But in case you’re interested in organic traffic for online service business, hold off on the delete button. Because Linda has a few myths to debunk for you. I certainly learned a few things that I’m keen to delve into.

See, we think about Pinterest as a Social Media tool for foodies and DIY home decor lovers.

According to Linda, we’re wrong on all accounts!

For starters, Pinterest is NOT one of the Social Media Platforms. It’s the third largest SEARCH ENGINE.

Three is …Pinterest! (which, by the way, is independent)

The implications of this are quite considerable.

We’re going to assume that as an online business owner, you’re hot on SEO.  10 years ago, all it took was some half decent blogs to score a first page Google ranking. These days, the competition is through the roof. The first page ranking, near impossible.

See…  Pinterest sees a lot less competition. Yet people spend hours researching stuff that is not just recipes and styling advice. All these Pinterest clicks and pins are organic traffic on steroids and THAT of course is the SEO equivalent of gold!

A full-time Pinterest strategist can only look after 10 accounts at the most, so Linda has an entire team to run the Pin2Win concierge program she offers. On top of that, Linda’s team consists of a few virtual assistants.

Recently she took the leap of adding an online business manager to the team, a decision she’s over the moon with. The newly introduced project management software tool allows her to keep all noses in the same direction.

For herself, it means she can totally focus on her role as CEO of LindaBarutha.com, which means networking for the organic lead generation company and holding the vision.

At the time of our podcast recording, Linda is up till her ears in the planning of her online summit ‘CEO’s don’t do that’. Next in line is the launch of her ‘Pin2Win Academy’; a DIY starter version of her concierge program.

You can hear Linda explain the entire process of using Pinterest to increase Google ranking herself on the Business Your Way podcast, which you can find here. (Sandrajulian.co/organic-traffic-on-steroids)

To make streamlining your systems easy, here are the must have tools for every online coach, consultant, course creator and service provider to be organised and efficient so you can scale your business. 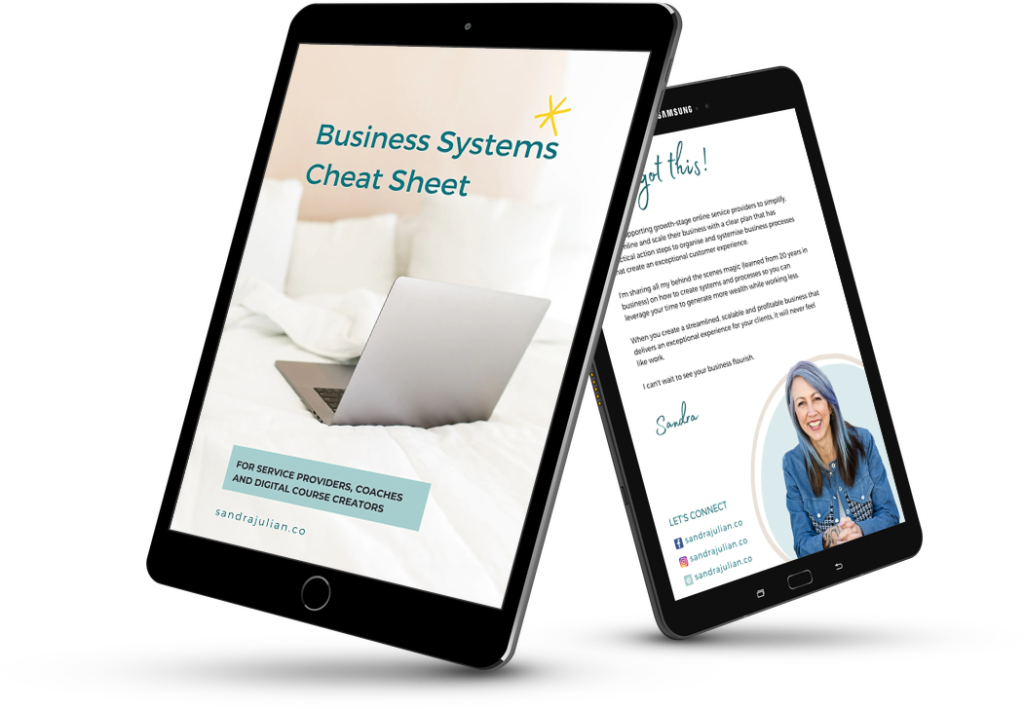