The secret to business success, according to Justine Parsons, from Your Virtual Assistant? It’s Team Power, baby!


What is the solution when you feel burnt out?

Who do you turn to when you hit the ceiling?

What are you most proud of in your business?


I’m speaking to Justine Parsons from ‘Your Virtual Assistant’.

And it doesn’t take long for me to notice that whatever question I fire at Justine, the answer always circles back to ‘It’s thanks to the team’. Logically, I have to wonder what it is about Justine’s team and her approach that makes it the centre of her success.

Justine from Your Virtual Assistant

Before we embark on any exploratory success team stories, I need to point out that Justine is no rookie in the field of VAs. She’s been at it for 22 years and counting. What started as a side-hustle grew to a freelance one-man band and ultimately a successful agency. The current head count stands at 35, but her goal for the ultimate business success team is… 500!

Justine’s ambition is to be the biggest providers of VAs (Plus Virtual Specialists and Virtual BMs) in Aotearoa-New Zealand.

I gasp! (Are you surprised?)

Forget Girl Power, this is Team Power! And the girl has fire in her belly!

Learning How To Build A Winning Team

Initial shock subsided, I’m interested in how people get to this phase of success from humble beginnings. Being an agency owner myself, it fascinates me how Justine made the scary first hire.

About 10 years ago, 12 year into her business journey, she hit a ceiling. In the end, as a solopreneur, there are only so many hours in the day. That’s where it caps. Unless ….you do something about it.

A business consulted confronted Justine with her preconceived idea that no one can support her clients the way she can. Justine giggles at it now, but it’s a thought that is probably familiar to many of us.

From there, it was the school of trial and error that taught Justine how to build a winning team. Top Tips: You better pay attention to who you hire, when you hire, why procedures matter, and how onboarding can make all the difference in team success.

AH, WE ALL LIVE AND LEARN!

Big Thanks to the Leadership Team… And Price Increases

These days, Justine’s team power squad counts 3 managers (An operations manager, an EOS manager, and a finance manager, in case you are wondering). It’s a recent move and one that happened in anticipation of that magical number 500 I still can’t get over. Justine calls it an investment, and I can see why.

Personally, I’m acutely aware that a manager’s time is non-billable.
Justine agrees, but to cover some of the extra cost, she (gradually and carefully) increased service prices (which, it has to be added, was a team member’s idea).

The flip side of the coin, however, is that Justine is no longer spreading herself thin. And that has to count for something! Adding managers to the fast-growing success team improves the client experience, staff no longer have to beg for Justine’s time, and Justine herself miraculously has mind space to hatch novel strokes of genius. Last but not least, going on a holiday knowing that the wheels will keep turning is now an option! I call that a win!

But maybe, she admits, the biggest reason of all, after 20 years, Justine was feeling the miles. Burn out was dangerously looming over her head. Now, with 3 extra brains and 3 extra pairs of eyes and ears, Justine no longer feels like she is the one pulling the cart on her own.

You know that story about the hare and the turtle?

Justine may have taken her time arriving at her first success team hire (It’s what happens when you’re the early adopter of a brilliant but novel idea. The rest of the world needs time to catch up.), but once the lid was off, the business exploded.

So I want to know how Justine manages growth.

Justine explains she believes you need to be open-minded and accept you don’t know everything. Business success truly is all thanks to the team, not just the owner.

Other team members make valuable contributions in ways business owners not always can. We may not have the expertise. But also, a different background can give a different perspective. And like it or not, but we may have been staring at the issue for too long to see what’s right in front of us.

The point is that wisdom is out there if you’re ready to acknowledge it.

And because of this mindset, Justine makes sure she has open conversations with the team.  And when you give them the space, they unwaveringly come up with plenty of suggestions.

It’s a mathematical fact: More minds know so much more than one.

Justine, The Business Success Team And The Constantly Shifting Sands

As her business and her success team continue to grow, Justine finds she no longer has a finger in every client relationship pie.

Occasionally, Justine still dabbles in client work, because it helps to keep her up to date with technology and reality. But like me, Justine finds she has become more of a project manager. You liaise with the client on the one hand, and with the team on the other, and in between those two,… you step back.

But it comes with a word of caution: Even when your track-record is glowing, you nor your success team can become complacent with client work.

Justine still makes sure she has monthly check-ins with her clients. This gives them the chance to provide feedback, tell them when the team needs to up their game. She also does a monthly report to keep the personal relationship.

But of course, clients keep a strong relationship with their VBA or their VA. That’s where the importance of a team that works well together shines through.

Justine’s success team only has contractors, not a single employee.

It’s a choice she made from the start, despite the general opinion being that you get no loyalty from contractors.

With that in mind, does it surprise you that some contractors who work with Justine have been with her for 8 years?

How does she do that, you may ask?

We mentioned before how Justine values her team’s input. It ensures people feel like they contribute to something; like they make a difference. Obviously, as with any success team, communications and procedures are key: SLACK, a project management system, a CRM , and regular Zoom calls keeps all noses in one direction.

But apart from the fact that Justine really values her team’s input, she also puts the action where the talk is.

Possibly the biggest reason contractors like to be part of Justine’s success team is the flexibility Justine offers. Some team members want to work at night, some only want to put in a 5h week, some choose to work behind the scenes, some offer their services alongside another job or other clients.

It’s all fine in Justine’s book, as long as everybody has a can do attitude and does what is expected on time and they do it well. Which may sound like a logistical nightmare, but also makes sense.

With that said, I want to hear from you. Have you worked out the ingredients to a team that sparks in all the right ways? What do YOU think is the key to a success team? I want to know. Do you like working with employees or contractors? And have you ever considered the alternative?

Discover how to use your unique personality to systematise and streamline your digital service business or agency so you can scale without sacrifice (do more and work less!) 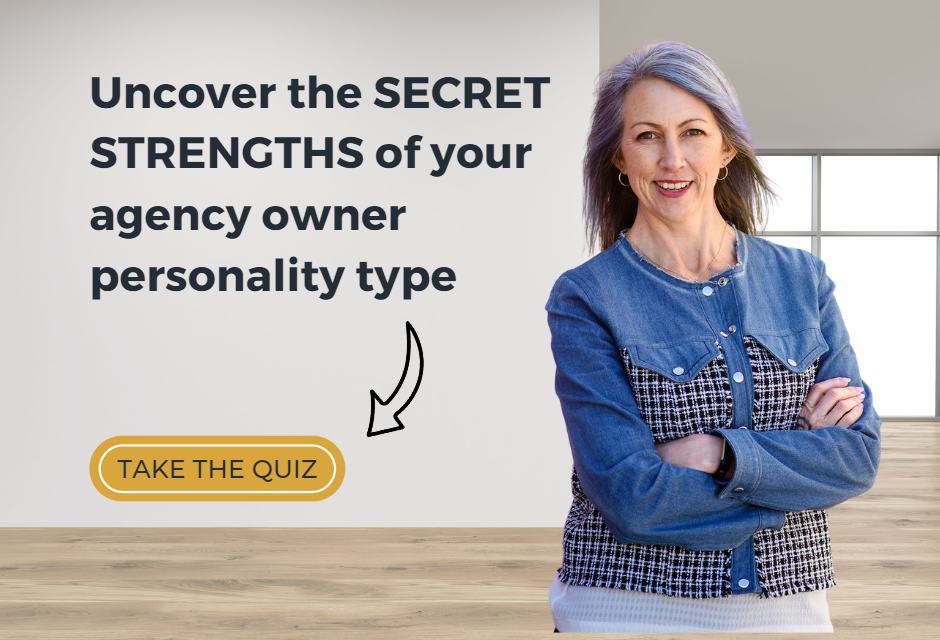